Late in the Spring, we took off for a long weekend to Sedona. The airfare to Phoenix AZ was low, the rental car and a place to stay affordable, and we were ready for another fast-travel, cram all we can into a few days trip. So– off we went!

The vistas Out West just blow me away every time I experience them. Our last trip was four years previously, when we hiked in the Rockies around Estes Park. Robin was delighted to be visiting Sedona again, whereas this would be my first experience seeing the famous red rock for which Sedona and surrounds are so famous.

The drive from Phoenix to Sedona in our rental car took a bit over two hours. Through the trip, we gained about 3,400 feet in elevation, enjoying the changing landscapes of the desert and piney woods along the way. It certainly looked bright, hot and dry out there, which reminded us that we would be arising each day before dawn to grab a coffee and quick breakfast before getting out on whatever mountain or butte we may be hiking that day.

Coming in to Sedona on State Route 179, also known as Red Rock Scenic Byway, is simply staggering. It seemed that suddenly we drove around a bend in the highway and right in front of us- Poof!-  appeared a majestic wall of towering sandstone rocks, lit up by the afternoon light. We pulled into a convenient viewing area to take photos and just gawp in amazement and appreciation.

We found Sedona to be a wonderfully hospitable town to stay in and use as a home base for exploring the area. A lovely, quiet motel somewhat outside of town but near enough to grocery stores, restaurants and our favorite coffee shop served our needs just fine. We were also quite close to Airport Mesa, which we visited time and again, as it offers a terrific overlook of the Sedona Verde Valley below, especially in the mornings.

Many people come here in the evenings to view the sunset but it ain’t easy looking into the sun. It was a much nicer experience to go across and up the road just a bit to the lovely restaurant at the airport and enjoy a meal outside on the patio, overlooking the stunning rock formations on the other side of the runway. The evening light bathes the faces of these rocks, constantly shifting the colors, and offering plenty of photo ops.

Our first morning we were enjoying our coffee up at the airport mesa overlook when we spotted six or more hot air balloons lifting off the desert floor in the distance way below us. Soon there were colorful dots hanging at different altitudes in the stillness of the morning. Robin embraced as many as she could between her outstretched arms.

New Age people identify Sedona’s numerous rock formations as vortex sites, where the earth gives off particular energy. While I don’t recall any special sense of approaching vortices as we drove by or clambered over rocks and dusty hiking trails, I can say that the light, the thin air, and the lack of humidity did combine to leave me somewhat light-headed, especially after a few hours of hiking in the sun in the dry, super-attenuated heat of late May.

Soldier’s Pass hike was our favorite hike, right in Sedona. We got to the parking area before it opened but the chain was down, so we flung all caution to the wind and hit the trail before the heat of the day could squeeze every drop of liquid from our bodies.

Not our jeep! It was in the parking area at Soldiers Pass trail head, providing a handy photo prop.

This was a serene, quiet hike, especially before the daily jeep tours start. We passed by the two natural arches and the sinkhole ominously named Devil’s Kitchen. Here’s a video snippet

While we aren’t shoppers, we did enjoy a break from the heat under the trees and along the cobblestone streets and quiet courtyards of the Tlaquepaque Arts & Crafts Village. We ate a delish Mexican dinner at a restaurant in the village, then enjoyed popping into various art galleries and stores offering astounding crafts that reflect the mix of cultures populating the area over the past, what, 100 years or more? Definitely a great way to chill during the heat of the day.

The Painted Desert and the Grand Canyon

Driving the south rim of the Grand Canyon was next on our To Do list, so we headed north out of Sedona along scenic state road 89A, which runs through Oak Creek Canyon. This entire route is simply mobbed on a holiday weekend, we soon discovered. Still. If we ever go back, we’ll add this canyon to our itinerary, as it is a phenomenally beautiful, and I’m sure, relaxing area to visit, hike, or chill along the fast-flowing creek. Just not over a holiday period!

Our driving route- Phoenix to Sedona and beyond. Map Link

We knew to avoid the long lines at the east entrance to the south rim of the Grand Canyon by purchasing our park entrance tickets ahead of time at the Flagstaff Visitors Center. After grabbing a bit of lunch in town, we topped off the gas tank for the next leg of our journey to Cameron Trading Post on the Navajo reservation, where we would spend the night before an early morning arrival at the Grand Canyon east entrance to the south rim.

But first, we planned an afternoon visit to the ancient pueblo ruins at Wupatki National Monument. The National Park Service description is a terrific one to quote:

Nestled between the Painted Desert and ponderosa highlands of northern Arizona, Wupatki is a landscape of legacies. Ancient pueblos dot red-rock outcroppings across miles of prairie. Where food and water seem impossible to find, people built pueblos, raised families, farmed, traded, and thrived. Today, if you linger and listen, earth and artifacts whisper their stories to us still.

We were mesmerized, from the moment we topped a ridge on the endless black ribbon of asphalt and viewed the magnificent vistas of the Painted Desert below us, from horizon to horizon. We were still miles from the turnoff that would take us in a giant semi-circle out to the ancient Wupatki pueblo ruins, located on a mesa way out there in the dusty haze of the afternoon.

In the parking lot, we dismounted from the air-conditioned car into a wind tunnel of hot, dry air sprinkled with grit that got into your eyes, teeth, hair, and threatened to blow your clothes right off your frame. Gripping our hats and collars tightly, as we walked up the lengthy, curving walkway that led to the little visitor center and quite suddenly the ruins greeted us.

The afternoon light was strong and bathed the rear of the ruins, casting long, deep shadows into and around what sandstone block walls remained.  I was transported, pondering the fact that the pueblo was abandoned in 1225 (do the math!). Those ruins have been there a very long, long time.

Here’s a video snippet   that captures the views and essence of this place. The audio is wind and more wind. Note the circular kiva structure down that valley. There’s also a ball court, similar to those found in Mesoamerica.

We stayed at Wupatki until the placed closed, then made our way up the road to Cameron Trading Post, where we would spend the night before heading out early in the morning to get to the east entrance of the Grand Canyon south rim drive just as it opened.

Picture the largest truck stop you’ve ever visited, located out in the desert where two highways meet- one that runs north-south and another that leads to the east entrance of the Grand Canyon south rim Desert View Drive.

How to describe this place? Acres of asphalt. Gas pumps crouching under massively high aluminum roofs. A 1950s era motel complex, complete with a circa 1911 dwelling of sandstone and wood- the embryonic stage of this sprawling, noisy, commercial center plopped down in the middle of frickin’ nowhere. But hey, we were very glad for the huge restaurant, which featured a menu of every kind of comfort food known to tourists and capable of handling at least 4 massive buses stuffed with weary tourists, and still have plenty of tables (if not staff) left over. 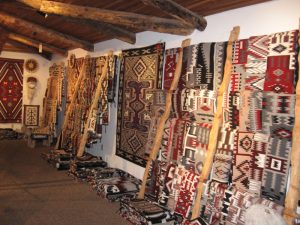 Images of wondrous things on sale at this place barely scratches the surface of what is the largest indoor native American -and -also -stuff -from -Taiwan- and- China place under one roof, likely anywhere in the American west.

After a long day, a heavy dinner, and a lengthy walk around thousands of displays under that one roof, we were ready for bed. We truly intended to drive out a ways into the desert to do some star gazing, but the amount of light loom this mother ship radiated likely lit up the desert for miles around. Heck, the giant billboard out by the gas pumps, alone, probably served as a backup lighthouse for some rock off of San Francisco.

We did each buy a t-shirt, each extolling the virtues of “dark sky” designated locations. The irony was not lost on us.

Irony aside, we did enjoy a quiet night’s rest, an early morning breakfast just after dawn, and headed west to drive the famous south rim of the Grand Canyon.

Grand Canyon south rim view, early of a May morning.

If you’ve been there, you’ve experienced the wonder, awe, and majesty. If you haven’t been, you gotta go. Now. Stop what you’re doing, pick a flight, rent a car, get packed and get moving. Life is short. This is one of those places on the planet that started the very concept of bucket list– or, well before that, one of the many Wonders of the World.

My puny photos do the entire thing an injustice, but I enjoy looking at them. Hope you do, too!

By the time we reached the Grand Canyon Village, it was lunch time and the crowds that holiday weekend were bursting the place at the seams. Still, we enjoyed a lovely lunch at the vintage El Tovar hotel, just above the old train station. Opened in 1905, this is a wonderful architectural example of  National Park Service Rustic  architecture. You can just picture Teddy Roosevelt himself strolling through the imposing lobby. Even if you don’t lunch here, it’s a Must See if you spend any time in the village.

After making our way back to Sedona, we spent our last sunset viewing the rock formations from a comfy table on the patio at the restaurant up on airport mesa. The next morning found us retracing our drive, back to Phoenix and onto the homeward-bound flight.

Sunset view of rocks from the airport restaurant atop Airport Mesa, Sedona.

Back at the office, it was back to the work week. But our memories of our visit to Sedona still linger, fueling our desire to get back Out West; back to the light, the dry air, the dust, the heat, and those breathtaking vistas and fields of stars that seem to go on, forever.

Lynn blends a love of independent adventure travel, history and the natural world with over 40 years of experience as an award-winning writer, photographer, creative designer, and producer. When not traveling, she serves as a consultant content strategist and digital marketer for U.S. Fortune 500 companies.