Unexpectedly, I was called to a business meeting at my employer’s HQ in Stockholm. I called Robin and left a message along the lines of “Wanna go with me to Stockholm next week?” Her reply, received in minutes, was “Is that a trick question?”

We were in a tizzy for the next 8 days, she arranging her client schedules, me wrapping up critical tasks at work and to prepare for what I anticipated would be at least one 16+ hour day of meetings in this beautiful, 700 year old European city spread across 14 islands, facing proudly out to the Baltic Sea.

With cat sitter in place, airline tickets and hotel arrangements secured and our carry-on bags packed, we headed out on our 6 day adventure. I was traveling at company expense, and to save $ had to capture a Saturday. Which was fine, because due to a national Swedish holiday the following Monday, we would end up having 4 full days on the ground before we returned to the states. Our last full day was my meeting, while Robin would be on her own to explore city delights.

We arrived at Arlanda airport, Stockholm on Saturday at 8:30am local time, after having left Atlanta at 3:00pm on Friday afternoon– flying 10+ hrs across the Atlantic to Amsterdam, where an hour “layover” between flights turned into a frantic race the entire length of the airport to get to the gate in time for our connecting flight to Stockholm–oh yeah and passing through Immigration Control and another security scan at the gate. It was all a blur. It didn’t help that I had taken a sleep aid on the plane and was groggy, but who needs presence of mind while running down concourses? The trick was to just keep my feet under me and try not to trip when stepping onto the moving sidewalks, which in any case weren’t moving.

Of course we took a couple of wrong turns at the Amsterdam airport, got confused with signage and ran into a really tricky (read: weirdly unfamiliar) Immigration Control process, but we did manage to get seats on the plane and soon settled into our 2-hour ride to Stockholm.

Having landed successfully at Arlanda airport, we fueled up with a latte and caught a taxi for the 45 minute ride to our hotel in the heart of Östermalm (“East City”), the more upscale area of Stockholm, a city of over 800,000 souls. 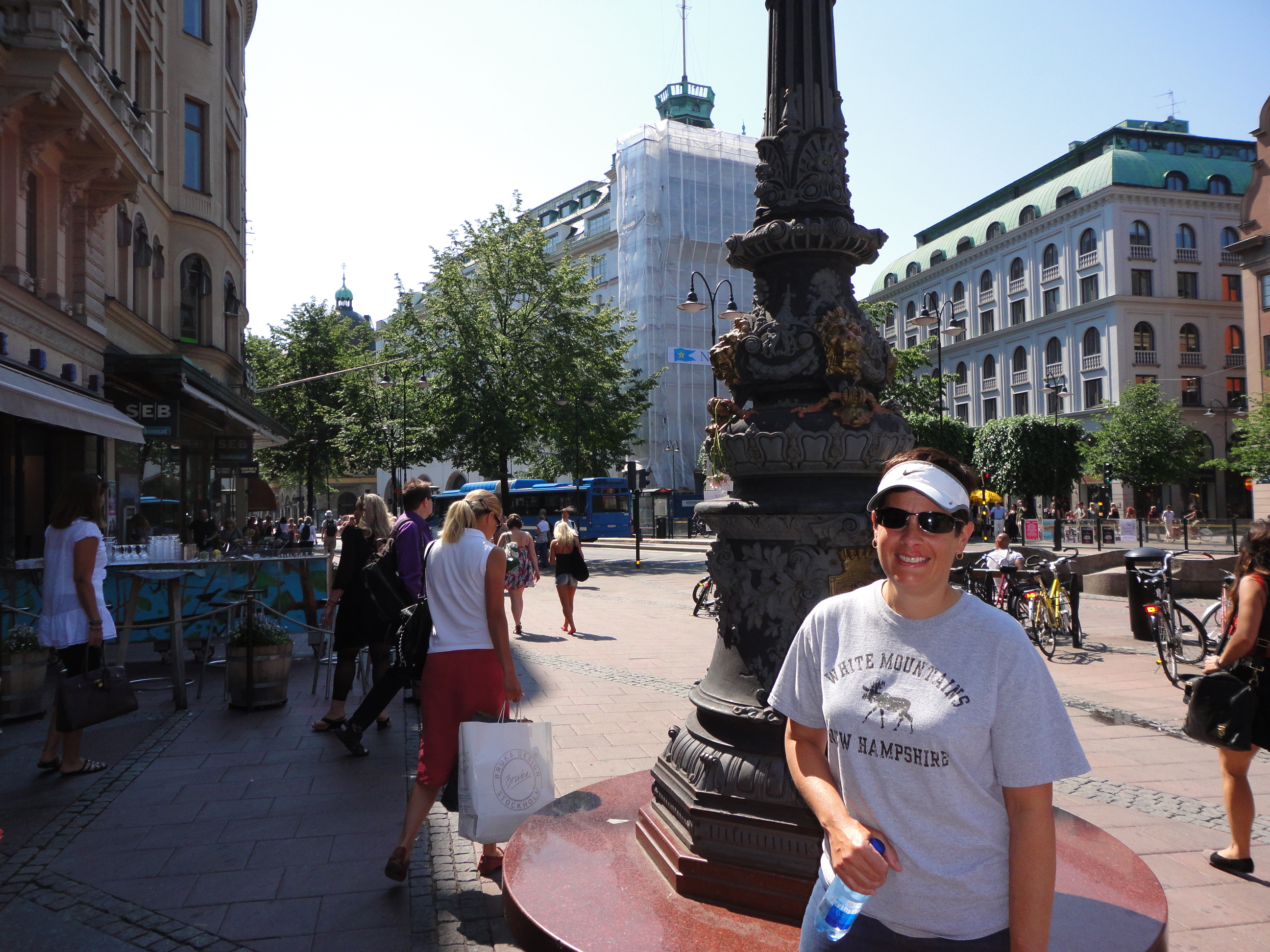 Hotel check-in completed, we quickly unpacked in our cramped, hot, virtually airless room (with AC- sorta) and proceeded to the cafe downstairs, where it was beer time for Lynn (they were kind enough to open the bar at 10am, accustomed as they are to jet-lagged international guests). Then– off to Gamla Stan (Old Town). 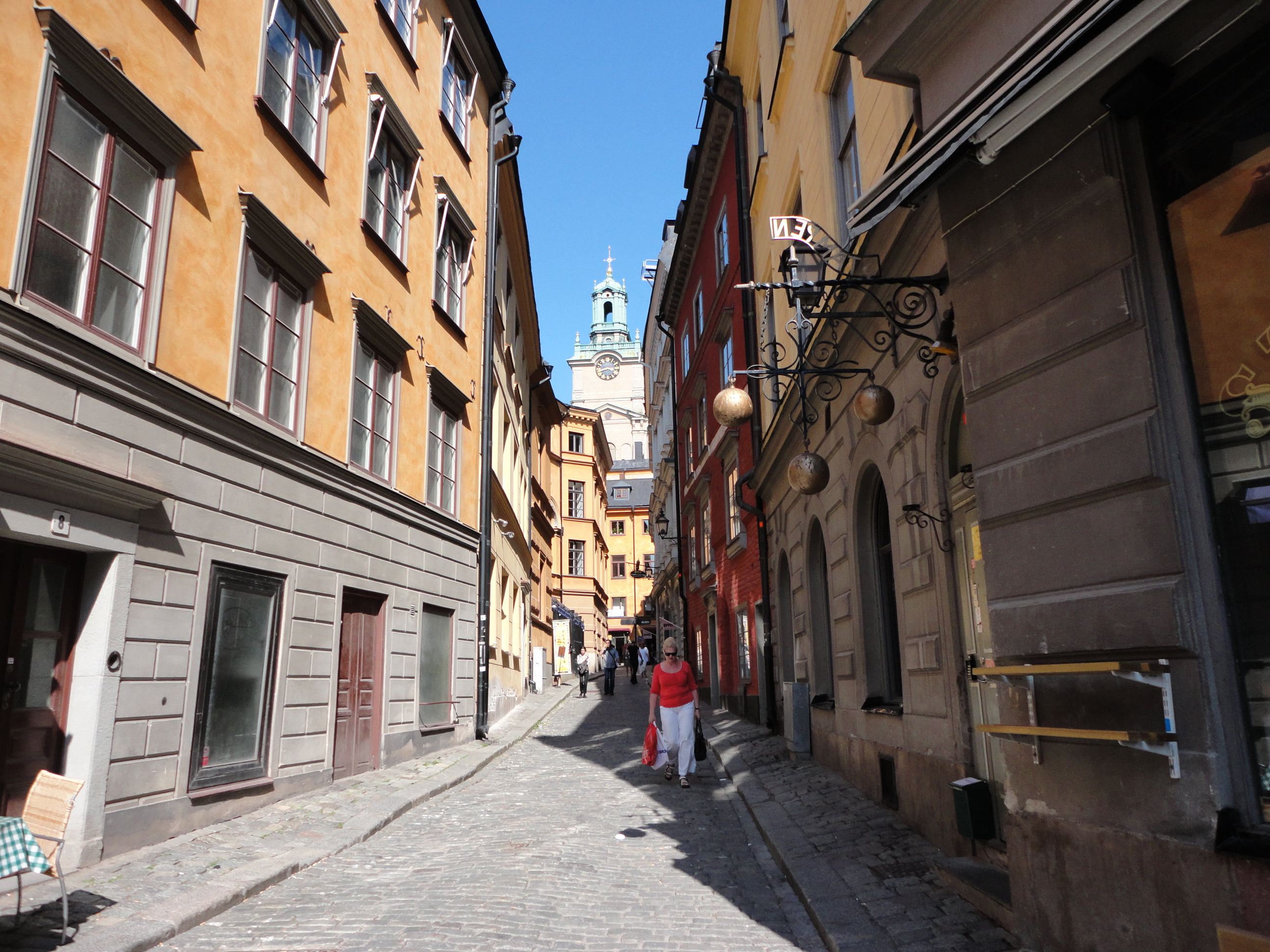 Our 25 minute stroll led us past a lovely park, peopled by humans and dogs enjoying the bright sunlight and an unusually hot (80+ degrees) and humid day. The city teemed around us, busses and cars zipping by on the streets and pedestrians crowding the sidewalks and street crossings. We grabbed a couple of bottled waters at the nearby 7-Eleven ($4 each- a taste of the sticker shock we would encounter throughout our visit) and passed through a large pedestrian outdoor mall featuring high-end stores.

We stopped at a large intersection, attracted by the sound of an approaching parade and, sure enough, here came the palace guard on horseback, right down the middle of the four-lane.

A band blared music and everyone stood and watched as the cavalcade rounded the corner and headed down the avenue toward the royal palace, which we could just see down by the water. Grinning, we followed the parade, careful to avoid stepping in the evidence of the passing steeds.

Once at the water’s edge, we were met by a busy, colorful panoramic vista of the city. High-rise hotels, old and modern government buildings were festooned with flags and banners. The wide boulevards were packed with traffic, while pedestrians and people on bicycles flowed around us as we stood in welcome shade, enjoying the cool breeze off the water and gawking at the spectacle.

The day seemed to radiate light and energy, with the groups of people relaxing in the park or sitting in outdoor cafes contrasting with the hurly-burly of the traffic and mobs of people crossing several bridges we could see leading to different islands before us. We chose the bridge in front of us, which we knew would take us past the huge edifice of the royal palace, and directly into Gamla Stan–which is where we spent most of our time while in Stockholm.

Portions of Gamla Stan date back to the 13th century, and the architecture, the narrow, cobbled streets lined with funky shops and cafes, the street musicians, mobs of tourists, the sights, sounds and smells galore, was truly a wonderful introduction to a European city that wasn’t bombed in WWII.

During our days on the ground, we managed to squeeze in a couple of museums, ride the public tram and subway and even visit the Bohemian Södermalm, with a population of 99,685, one of the most densely populated districts of Scandinavia. A few years after our trip, this area was to be made more famous as the home of the fictional heroine Lisabeth Sander, the protagonist of Stieg Larsson’s Milennium Trilogy, which the “Girl with the Dragon Tattoo” movie made famous. 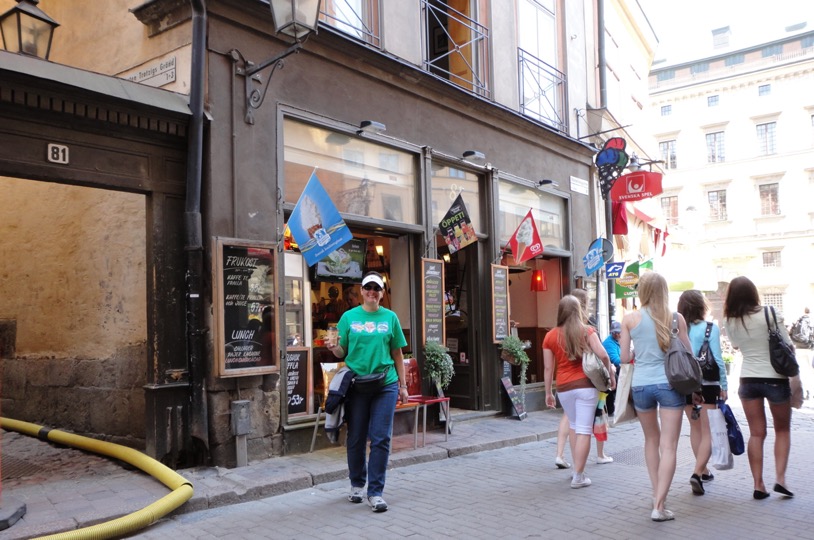 Many things amused and confounded us, not the least the adventure of visiting a local pharmacy (green cross, not red) to get something to treat my poor swollen, red and yukky legs for the poison ivy that I had tangled with just before leaving on this little European adventure. Approaching a woman in the store wearing a white lab coat, I asked if they had anything for poison ivy. My request was first met with a blank stare (“I don’t think she speaks English”, Robin whispered.) I pulled up a leg of my jeans, pointed to the damage unveiled, and the woman blinked and said “On-ne-MAL?”

“I think she just asked if you were attacked by an animal,” Robin choked out behind a snicker. I wiggled my fingers (why? No idea) and said “No. Plant. Plant!” The woman motioned another lab-coated lady to come over. I pointed to my leg. The lady smiled and said “Cur-te-ZAL?” Ah-ha! Cortisol! Yes! And yes, the stuff did work—after 4 days of applying it constantly.

Note to self: next time traveling anywhere, pack an English-to-local-language medical dictionary.

By our third day on the ground, it was time for me to participate in an all-day meeting at my employer’s HQ . Robin took the morning to affect our transfer from the fairly comfortable, if tiny, room at the Scandic Park hotel to our truly miniscule closet at the “crap hotel” down the street from HQ. Turns out we couldn’t stay just one more night at the Scandic Park due to a big football (futbol) event that had hotel rooms in the city booked solid.

My day concluded with a walk in the rain with my hosts to a nearby restaurant. Afterward, I made my way back to our cramped, airless, non-AC room in an ancient hotel undergoing much-needed updating. After getting stuck in a truly medieval elevator, I found our room, where fans perched on window sills struggled valiantly to move the still air. The windows were thrown fully open, the curtains pulled back as far as they could to allow the hot air and the city sounds to drift in.

The curtains remained open all “night”, which at this time of year lasted approximately 3 hours, between midnight and 3am. Oh well, no sleep for our last night to help us prepare for the 18 hour travel day that awaited us, as we caught the taxi to the Stockholm airport and retraced our steps, including the mad dash down the entire length of the Amsterdam airport to catch our connecting flight across the Big Pond—only to arrive in Atlanta late at night and drive our way slowly home through a torrential downpour packing hail. But hey, we had a great time, as the photos (with helpful captions) will attest!

Lynn blends a love of independent adventure travel, history and the natural world with over 40 years of experience as an award-winning writer, photographer, creative designer, and producer.