Hiker Madness! In our haste to take advantage of the 5 or so days of perfect weather forecast for our 6-day vacation, our first day’s hike turned out to be a pretty hefty one (as in straight UP) hike just a few miles from Smitty’s family cabin, at Groton State Park, near Peacham, VT. Views were great but ouch, my heart-rate was sky-high more than once, as we trudged on a seemingly endless, giant Stairmaster up, up, up a mountainside in the northern section of Groton.

Our butts were draggin’ seriously when we got back to the cabin after a 4-hour excursion. I was hungry enuf to eat a bear, but instead put the teriyaki-marinated chicken tenders on the grill, sat down on the cabin porch, and enjoyed the narrow view carved through the towering trees of Harvey Lake, seen from atop the steep hill where the cabin is perched. Knees, calves and quads objected strenuously when I tried to lever myself up from my perch to turn the chicken. I didn’t sit down again until I was sure I wasn’t gonna hafta move for awhile. Talk about stiff and sore!

Our arrival day was hot, humid and hazy as we drove the 3.5 hrs up to the cabin from Logan airport in Boston. A gentle cold front came through, with little rain, and for days afterward we enjoyed temps in the low 50s at night, awoke to 55 degree mornings and by 10am we were hiking in shorts and sleeveless shirts. Crisp, cool, fresh air- what an amazing (and welcome) respite from the unrelenting heat wave in the south, now well into its 4th month with no end in sight!

Nights and days the Loon pair hooted and cried their mournful cries out on the lake. I thought it an unusually quiet summer, with less traffic on the lake than I’ve seen in the past, to which Smitty and her sis Cynthia agreed. They should know, they’re both in their 80s and have spent summers here throughout their lives. 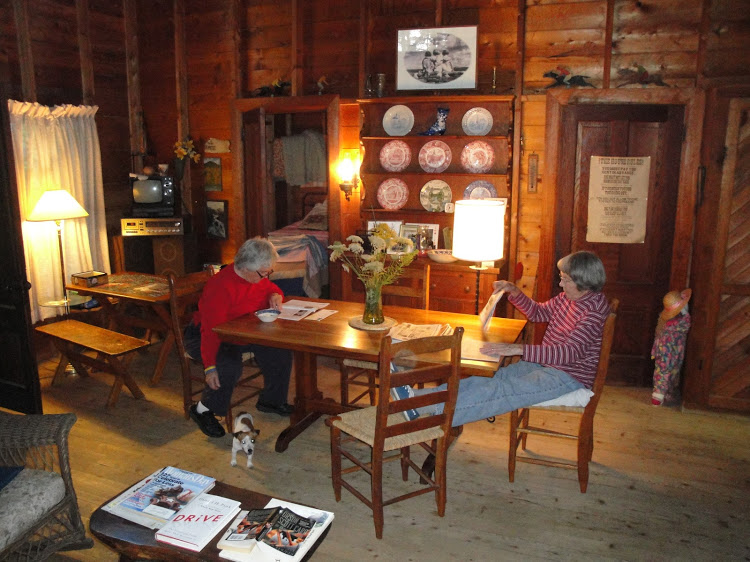 Staying in this simple frame (non-winterized) cabin is, to me, a pleasure. I like the turn-of-the-20th-century ambiance and how very, very little the entire region has changed (relatively) since the early European settlement period, circa late 1700s!  Check out the pix here!

However. Simplicity and ruggedness only go so far when 4 women share one very recalcitrant toilet! This turned into a real, er, “issue” for the first 3 days of our visit. We managed to make do by visiting Smitty’s cousin’s nearby cabin for relief stops, but that place had its own problems- no water pressure! Eventually the cabin’s old toilet and tank were replaced by a 21st century low-flush fixture that worked (thankfully) like a charm.

Meanwhile, back at the hiking, after fortifying ourselves with a hearty breakfast at Polly’s Pancake Parlor, and enjoying the magnificent views of the Franconia area of the White Mountains, NH from Polly’s parking area, we headed on into the notch.

That old familiar feeling of being squeezed between towering peaks struck me again as we drove within this section. I believe this is one of the most beautiful, awesome and breathtaking 10 vehicular miles or so of mountain scenery to be had this side of the Rockies. At the northern end, one is bracketed by majestic massifs with near-vertical faces on one side and a huge rock slide down almost the entire side of a towering mountain on the other side.

I’ve been up and down this section of highway, in all seasons, in rain, snow, sleet, hail, fog and hot, hazy sunshine and it never fails to move me. Many times the ceiling has been a mere 100 or so feet above our vehicle, and driving through the lowered ceiling at such times compounds the squeeze effect, yet somehow makes me feel cozy, so closely hemmed in and bound to a given geographic spot.

But I wax goofy. The whole effect simply can’t be captured in still pix or video, nor apparently, in words. 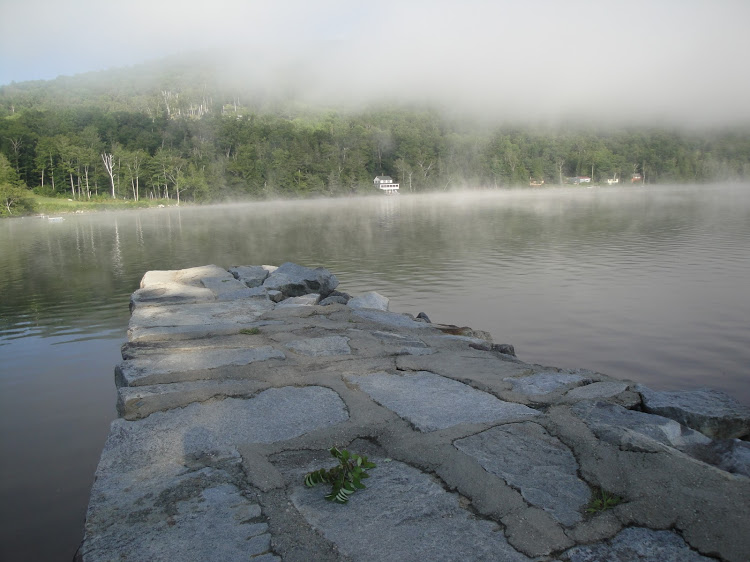 The hikes, however, continued to tax our physical reserves. Although we try to “tune up” for hikes in the north Georgia mountains near our home, hiking at these elevations, in this steep terrain, remains difficult and demanding. But, we push ourselves and, time and again, are rewarded by incredible experiences and breathtaking views or waterfalls or both. And, to me, the final payoff is sitting in the car after the hike, sweaty, breathless, thirsty and often ravenously hungry, just knowing that we are young enough, fit enough and (likely) stubborn enough to make it, often well within the “average” estimated round-trip timetable for a given hike. OK so we aren’t 20-somethings running up and down mountain trails like goats, and the stiff and sore joints and flare-ups of old injuries remind us there’s a price to pay for our basically sedentary lives. But it’s a price we’re happy to pay, for as long as we can.

View pix of this trip Here. More detail about Harvey Lake, Smitty’s family cabin, and previous hiking in the area, along with photos, can be found in an earlier post.

Lynn blends a love of independent adventure travel, history and the natural world with over 40 years of experience as an award-winning writer, photographer, creative designer, and producer.

A Case of the Bends

The Great White, a Tornado & a SCUBA SNAFU