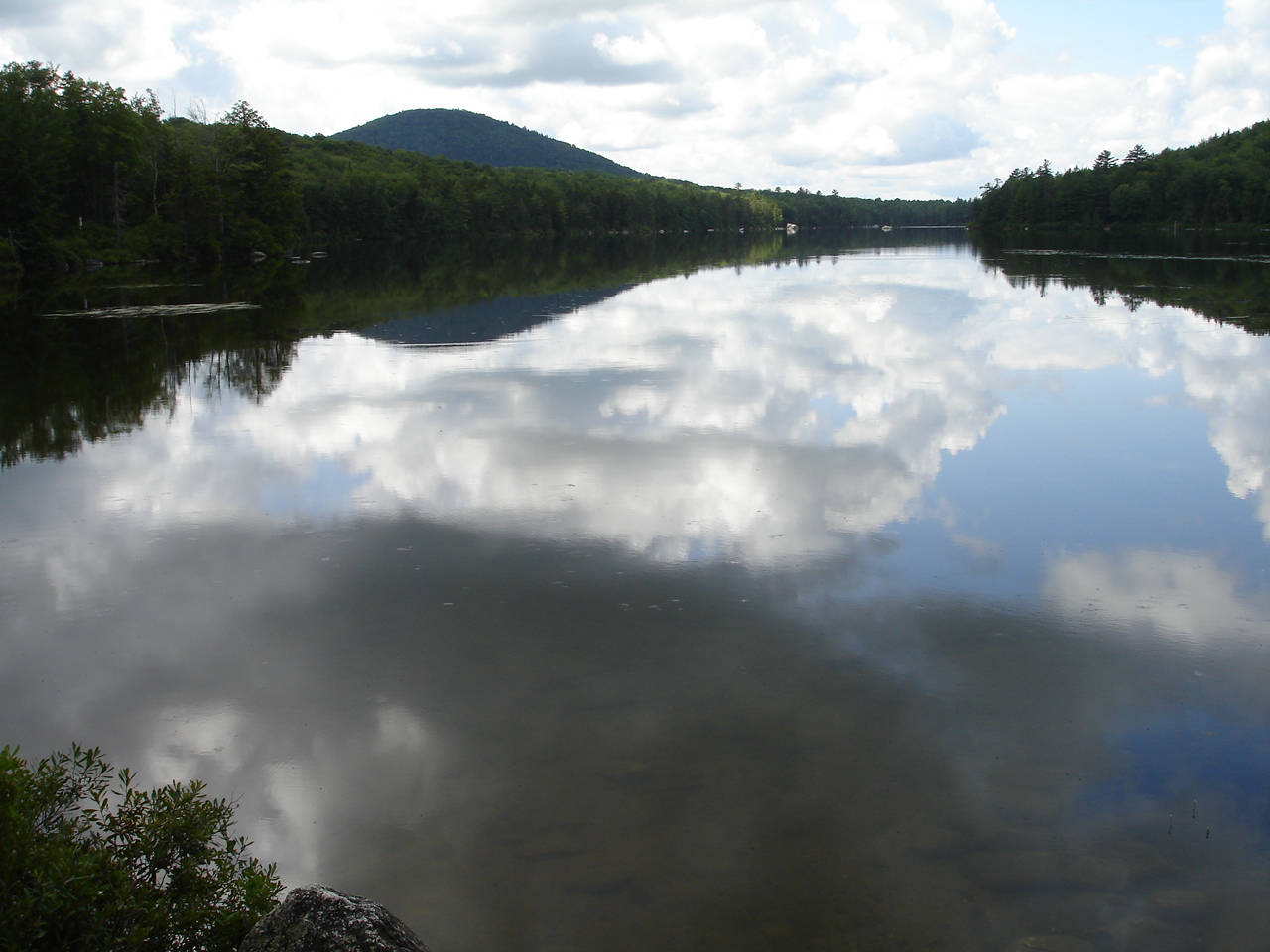 What a way to start a vacation. I came down with a nasty chest-then-head cold 2 days before we left so I was a mess. Robin caught the thing the 2nd nite we were there. It rained for 5 days, hard, night and day in VT and NH. Creeks and rivers flooded. We did manage to squeeze in a coupla short hikes in-between showers and managed to get thoroughly soaked on another hike later in the week. Mostly we hung out at my surrogate mother’s family cabin on a mountain, overlooking a lake in a lovely corner of what’s known as The Northeast Kingdom of Vermont. We spent a lot of time coughing and blowing our noses and going thru 5 boxes of Kleenex (!) Smitty didn’t catch our cold, thank goodness– she had one 2 weeks earlier and I think she was immune. Good thing, because at 79 years young, she didn’t need to catch a cold.

It was great to be back in Vermont, out in the rural sticks, surrounded by verdant green hills, pastures and mountains, and re-visiting the rustic cabin that Smitty’s great-grandfather built when he settled the area. The mountain and lake are named after him, and many family members are interred at the amazingly scenic hillside cemetery in the tiny, incredibly picturesque nearby village of Peacham.

One always eats well, considering there are fresh veggies from local farms available every day, and fresh berries ripening all over, in every ditch, beside every road, and along every hiking trail. I grilled on the hibachi every nite, we had chicken and locally-grown steaks. We did a good job catering to Smitty, cooking and buying groceries and washing and putting up dishes.  Since she had surgery on her knee the previous summer she was pretty limited in her mobility so we took care of stuff that needed to be taken care of in the cabin, which is 100 years old this year! 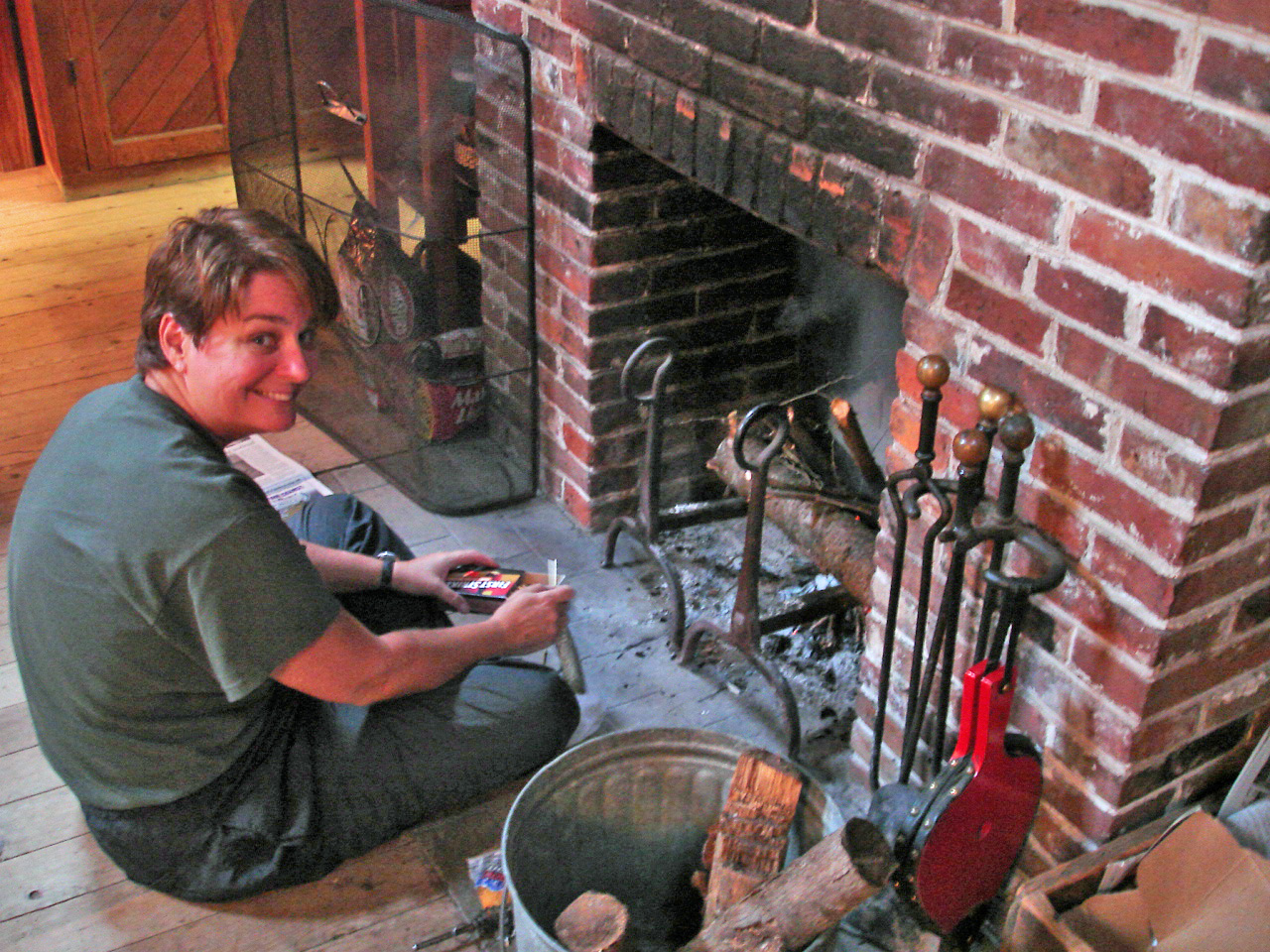 We all read books and I kept the fireplace going on the cool nights until bedtime (9pm latest). It was soooo quiet, the only sounds at night were the rain drumming on the roof and the Loons calling out on the lake, which was a real treat to hear again. Two nights it rained so hard they didn’t call at all.

We spent time up in the town of St. Johnsbury VT, about a 30 min trip up the Interstate, and the nearest town of any size. We found a cute bookstore/coffee house where we hung out, drinking lattes and reading books. I spent more $ on novels than anything else (besides gas) the entire trip. I did hafta buy a foul weather jacket (bright yellow) from the Army store cuz I discovered my light windbreaker was just that, hardly rain-proof. Of course I had to discover it in the middle of a hike when it started to pour. It was raining harder under my jacket than outside. Sheesh.

I think it was Tuesday when we went to Groton State park near Smitty’s cabin- it’s in the Green mountains of VT and has some good hikes. We started out around a lake but suspected it would be really wet and muddy. Well, not only was the trail a muddy morass, we soon ran into a mess of bear tracks going and coming on that trail, which was full of ripe blueberry bushes on both sides of the track. I took some pix of the tracks next to my boot then it started to rain harder so we headed back to the car, but not before I signed in “Bear” a mere 5 mins behind our outbound time in the official trail sign-up notebook. If anyone bothered to read the thing they might get a chuckle.

The weather did break by Friday so we got a short hike in that morning at a place in the incredible Franconia Notch area of the Presidential range of the White mountains in NH, which is about an hour’s drive from Smitty’s cabin. I’ve been on this Falling Waters trail lotsa times. But not after a week of hard rains. It was so wet I slipped and fell on my right hip and got a huge strawberry on my upper leg, ouch. After that I was kinda shaky on my feet, didn’t trust my boots any more (I need to replace them- worn soles). The wet-foot river crossing I recalled had turned into a raging torrent, no surprise. 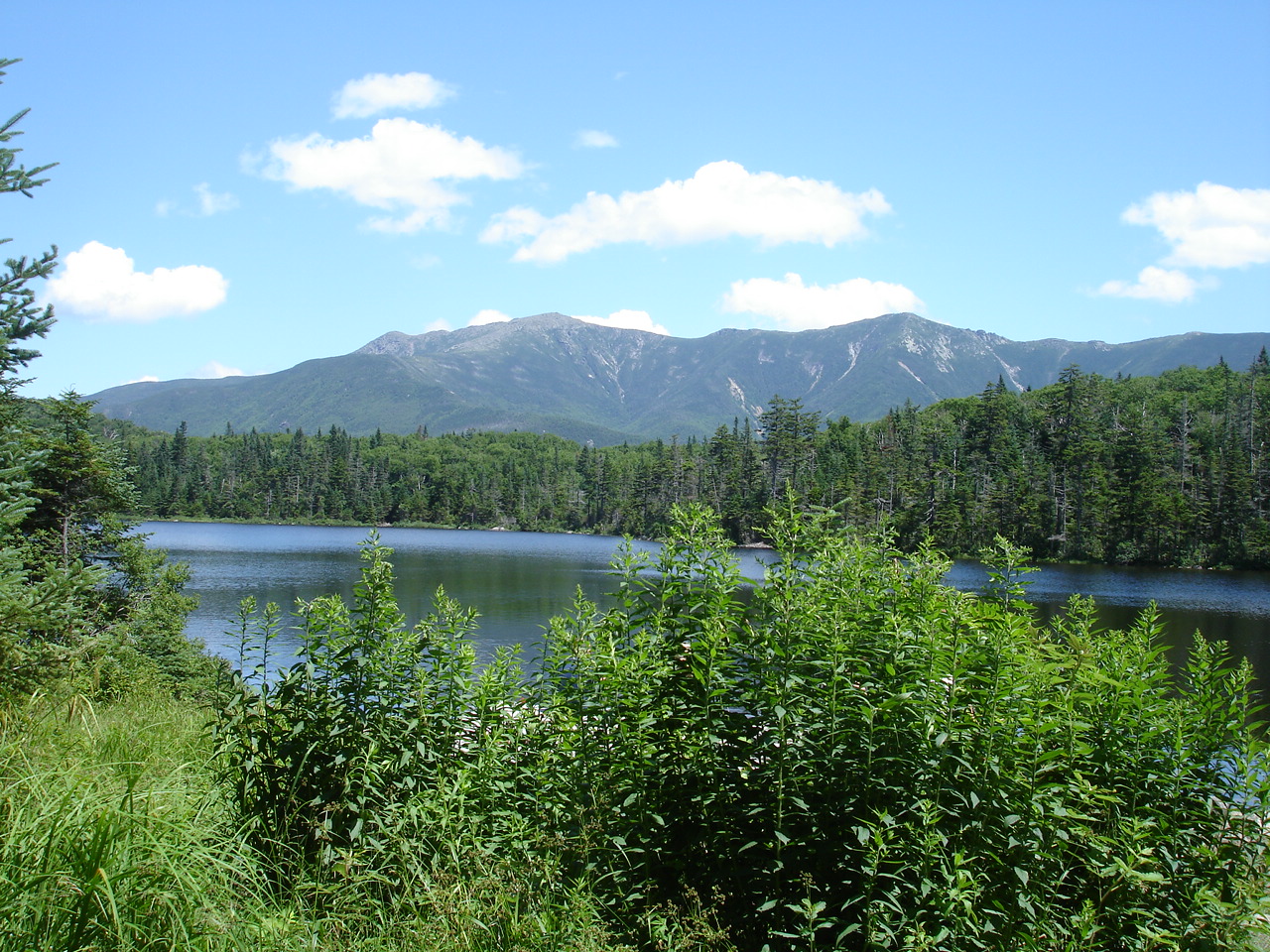 We didn’t dare try to cross on the soaked and slippery tree logs that were rocking in the blasting water and foam so we went back and off on a different hike nearby to Lonesome Lake, gaining over 1,000 ft in elevation across 1.2 miles of terrain. It nearly killed us but we made it up and over that mountain in 1:30, only 15 mins behind the average time, so I was proud we could do that, considering we were both still coughing and hacking and blowing noses. Beautiful place and photos made it worth the climb up and all the clambering back down the slippery trail.

Sat. morning we said our goodbyes to Smitty very early and were on another trail by 8:30am, up another mountain. This trail was fairly dry and, while steep, not like the one up to Lonesome Lake had been the day before. Nice views of the surrounding White mountains rewarded us after climbing up a long crack on a mountain bald. Then we headed on back to Boston, which was about 2.5 hrs drive. We ate at the famous Clam Box in Ipswitch, Robin’s newest favorite New England restaurant. (I had lived in Ipswitch for a couple of years). Then we hung out in Newburyport, just up the road from Ipswitch, down at the river, watching boats and walked around an art show, then headed to the airport to turn in the car and wait a few hours for our delayed flight to take us back to Atlanta.

All in all it was good we had the forced relaxation to recover from our colds. Plus we spent more time hanging with Smitty, which was nice. We never got to swim in the lake, even tho I got into it in my underwear to save a piece of Smitty’s cousin Lorna’s dock when it tried to float away in the flooded lake. I gained a few points for that effort, even if the photo of me in my underwear makes me look ridiculous.

Lynn blends a love of independent adventure travel, history and the natural world with over 40 years of experience as an award-winning writer, photographer, creative designer, and producer. When not traveling, she serves as a consultant content strategist and digital marketer for U.S. Fortune 500 companies.

Simply Messing About in Boats, Pt 1